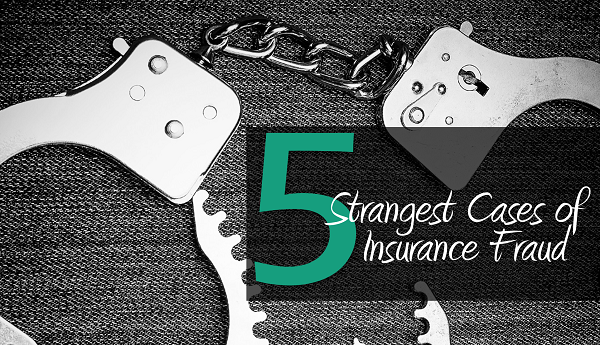 According to the FBI, did you know that insurance fraud costs insurance companies (and ultimately consumers) more than $50 billion each year? This equates to approximately $500 in increased annual premiums for each one of us.
Plus, when you start adding lost productivity for businesses, ruined family finances, and the cost to investigate and prosecute, the total figure is probably much higher.
For the most part, these fraudsters aren’t criminal masterminds. Here are five of the craziest insurance fraud scams we have ever encountered, from phony slip-and-falls to fake deaths to desperate business owners.

1. Four women made up a man, faked his death, and staged a funeral – tombstone and all. Four California women were convicted of wire fraud after they allegedly invented a man (“Jim Davis”), faked his death, and then staged a funeral. The criminals went so far as to purchase a burial plot for and bury him without a headstone. But despite the extravagant funeral described on paper for the financial assignment companies—including an ornate casket and elaborate floral arrangements—the funeral was a simple affair, attended by several phony family members recruited to play the part of mourners in case anyone was watching.
After two insurance companies launched an investigation into their claims on Mr. Davis’ $1.2 million in life insurance, the FBI arrested Jean Crump, Faye Shilling, Barbara Ann Lynn, and Lydia Eileen Pearce in 2010.
2. Security cameras catch two jewelry wholesalers staging a robbery at their own store. In December 2008, two New York City business partners hatched the ultimate plan to save their struggling jewelry business – a fake heist. Prosecutors claimed Atul Shah and Mahayeer Kankariva hired two men, dressed them in Hasidic Jew costumes, and staged a robbery at their shop. To cover their tracks, they poured chemicals into their security cameras to destroy any footage. They then filed a $7 million claim with their insurer, Lloyds of London.
Unfortunately for them, police were able to salvage the footage from the damaged security tapes. They showed the men entering their own safe and removing all the jewelry two hours before the supposed burglary.
In March 2011, both men were convicted of insurance fraud, attempted grand larceny, and falsifying business records.
3. A security camera captured a man allegedly faking an injury on a wrecked bus. When Ronald Moore saw what he thought was a serious bus accident, he hatched the ultimate get-rich-quick scheme: Pretending to be a passenger, he dashed onto the bus, clutched his back in pain, and later filed a claim for injuries, prosecutors claimed.
Unfortunately for him, the whole charade was caught on tape. According to Assistant District Attorney Linda Montag, the accident was a tiny tap by a taxicab. There wasn’t even a scratch on the bus.
Moore was ordered to pay a $1,000 fine and sentenced to 2 years of probation.
4. Woman files 49 slip-and-fall claims in seven years. When Isabel Parker rant out of funds to support her gambling addiction, the 72-year-old orchestrated 49 slip-and-fall scams at department stores, supermarkets, and liquor stores in three different states.
An investigation by detectives from the Philadelphia District Attorney’s Insurance Fraud Unit revealed Parker used as many as 47 aliases and 11 different addresses to file her claims, which totaled more than $500,000.
She was convicted of 20 counts of insurance fraud in 2003 and served a four-year sentence under house arrest.
5. Man allegedly uses Wikipedia photos to claim a $20,000 insurance policy on his nonexistent pet cat. Washington insurance officials claim Yevgeniv Samsonov tried to bilk his insurer out of $20,000 to cover his nonexistent cat’s death. In 2009 he claimed his pet died in an auto accident.
Dissatisfied with the offered settlement from the cat’s insurance company, Samsonov supposedly sent photos to prove the cat’s value. However, the adjuster’s quick web search for the insurance company proved the pictures were actually taken from a Wikipedia page.
January 8, 2021/by webcontroller
https://chadholste.com/wp-content/uploads/2019/02/The-Holste-Agency-2.png 0 0 webcontroller https://chadholste.com/wp-content/uploads/2019/02/The-Holste-Agency-2.png webcontroller2021-01-08 05:30:102020-12-14 06:07:595 Strangest Cases of Insurance Fraud